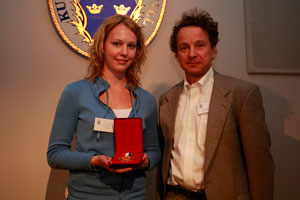 The Molecular Frontiers Inquiry Prize (MFIP) is the world’s first prize rewarding questions rather than answers, recognizing the critical role of curiosity in the scientific process as well as the value of skilled inquisitiveness in all aspects of modern life.

Each year, five girls and five boys win the MFIP for asking the most insightful and thought-provoking scientific questions. Their entries are judged by a jury selected from our scientific advisory board consisting of world-leading scientists including thirteen Nobel laureates. The prize consists of a medal, a hand-painted certificate, and a gift - so far this has been an iPad.

The Medal, designed by eminent bio-nano-technologist Prof. Shuguang Zhang of Massachusetts Institute of Technology, depicts the famous DNA molecule viewed from the unusual "z" direction on one side and an exclamation mark made of a carbon nanotube with a "C60" buckyball point on the other. It also has our motto: CURIOSITY CREATIVITY HONESTY KNOWLEDGE.

The certificate was designed and hand-painted by the chair of our Educational Board, Dr. Elizabeth Ball and is printed on heavy paper like that of the Nobel prize certificates - perfect for framing! The MFIP also serves to democratize access to top science minds and empower youth –all that is required is curiosity and an Internet connection.

Participation in the MFIP teaches youth that their innate curiosity is a respected and sought-after trait that can be developed into a transferable skill.

Read more about the Prize and see winning entries on the competition website, mfinquiryprize.org

Due to the Covid-19 pandemic, there will be no symposium this year. We usually announce the winners in conjunction with one of our symposia. We have therefore decided to extend the deadline for submissions to the 2020 competition until Jan 31, 2021.

We are always looking to extend our network of volunteers, and there are many ways you can participate. Join our global society!

Molecular Frontiers is a non-profit organization and relies heavily on external support to continue our activities. Donations are welcome!